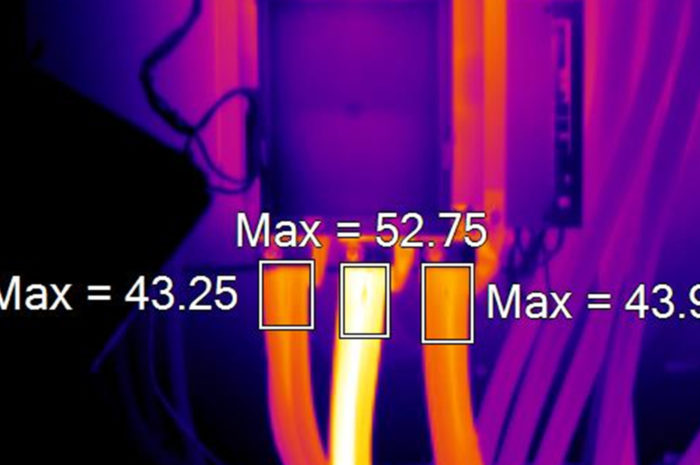 A client requested an infrared survey of the electrical distribution system for six 480VAC motors, each of which drives a compressor. Four of the motors surveyed are identical 700 HP 2-pole motors. There had been incidences of leads blown off, and the main circuit breaker had tripped more than once. The day prior to the survey being performed, a technician was dispatched to replace lugs that had been blown off one the 700 HP motors. This motor had not been restored to service when the survey was conducted.

The survey consisted of an IR scan of the control cabinets, the motor junction boxes, and the MCC cabinets. No significant heating was found in the MCC cabinets. One motor is VFD controlled. The cable and conduit configuration to the variable speed motor is different than the soft start motors.

The survey began by collecting the thermal signature of the soft starter in the Control Cabinet. The thermograph indicates unequal heating on the load side of the soft start on the B-phase. The maximum Delta-T seen in the image was at least 9.5°C . In most cases, this would be considered a moderate problem and attributed to loose or corroded connections. However, this signature is also present on another identical machine. It can be found at the center phase in the J-box, where one cable of the three parallel cables for the center phase was heating.

The J-box of the motor was opened for an IR scan and the compressor was started again to survey it under load. The following thermograph shows the heating in the junction box of the motor while operating under a load.

The thermal signature at the J-box indicated unequal heating between phases. The maximum Delta-T between phases was at least 15.68°C. The visible light image shows the junction box is fed 3 phase power from the control cabinet through 2 conduits. There are 9 parallel cables feeding the motor (3 per phase). Five cables are feed through one conduit (the left in the image) and four cables through the other conduit (the right in the image). The center phase of the motor is terminated to a single cable from the right conduit and two from the left. According to NEC 2014 Edition, the 3 cables of a phase should all be run through the same conduit, or should be run through 3 separate conduits. Failure to do so can lead to a transformer action creating significant heating. We discussed the way the cables are running with technical support staff at EASA and received an excerpt from the National Electrical Code 2014 Revision which states with regard to this situation—“Where run in separate cables or raceways, the cables or raceways with conductors shall have the same number of conductors and shall have the same electrical characteristics.”